Khadi. Chanderi. Ikkat. Ajrakh. Tanchoi. Zari. Kanjeevaram. Bandhani. These names can take one on a journey spanning the length and breadth of Incredible India. Whether you’re a fashion business management  or fashion design  institute student hungry for a muse, or a fashion-conscious citizen; with its rich textile culture developed over centuries, it is no surprise that Indian clothes and patterns have become the source of inspiration for many worldwide. In today’s globalized context, these names not only take one on a journey within India but have also found their place overseas.

Today, sari blouses double as crop tops and bindis are commonplace in Coachella, complemented by high-waisted jeans and vintage dark-tinted Ray Bans. Bollywood might have had a role to play in highlighting the variety of Indian fashion, or street-spotted fashionistas have shown the world an aspect of Indian fashion that seemed to appeal. Whichever is the case, the signs of Indian influence on global fashion are unmistakeable.

Below is a list that would inspire both fashion designers in India and abroad because these outfits are an epitome of fusion across cultures. Some materialize on the dazzling runway, and some in sunlit alleyways. Some are shot on five figure DSLRs and some on trusty iPhone cameras. Nonetheless, they reveal the (physical) distances creativity can travel, and amalgamate into a new age fashion of sorts. 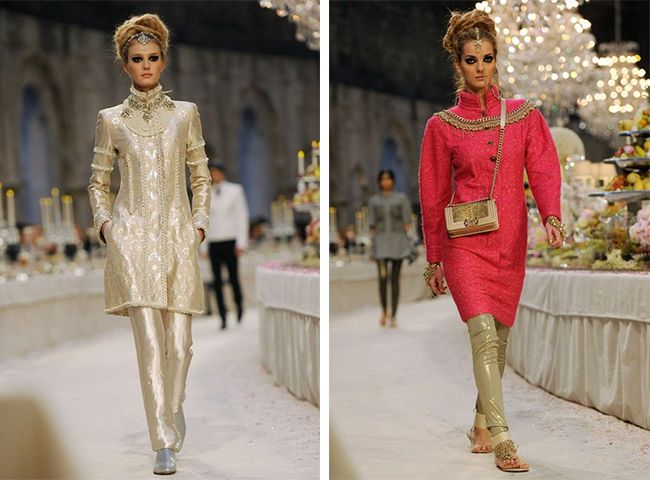 The outfits were identifiable as Indian-inspired, with kurtas, drapes, adorned headpieces, moccasins and beaded slippers being the obvious few elements spanning the collection. It was gracefully executed, and the set-up was complete with high tea, crystal decanters, and even a toy steam train. 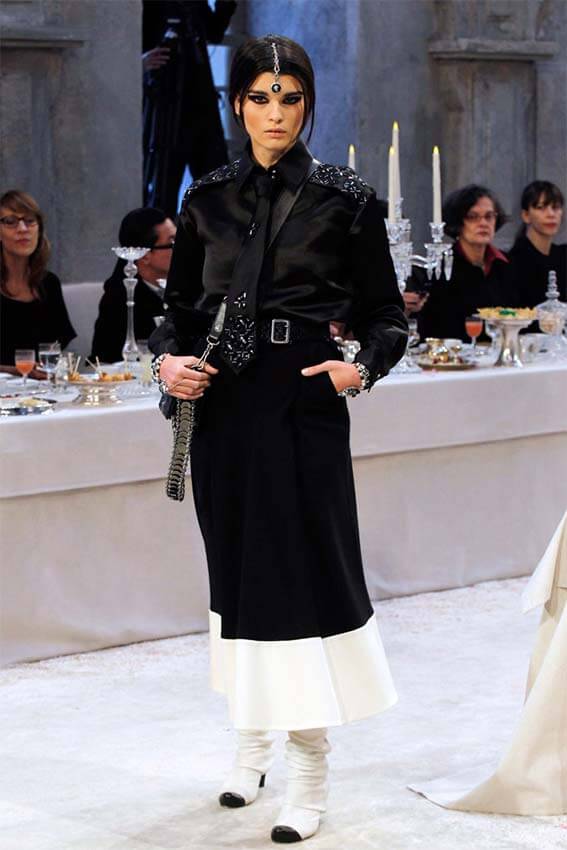 Above, it is evident how the European trench coat got a kurta updo while staying true to Chanel’s sophistication and signature boots.

The Belgian fashion designer gladly admitted in an Elle India interview how India has contributed “hugely” to his design sensibility. Having worked with Indian craftspeople since 1987, Van Noten is considered a pioneer in being a Western designer inspired by Indian fashion.Interestingly, he has high regard for the sari because it allows flexibility of the fabric, as one does not have to cut it up and instead can let the cloth take its natural course. He also points out that with a sari, which is essentially cloth wrapped around.

Interestingly, he has high regard for the sari because it allows flexibility of the fabric, as one does not have to cut it up and instead can let the cloth take its natural course. He also points out that with a sari, which is essentially cloth wrapped around the skin, beauty is derived from the attitude of its wearer. 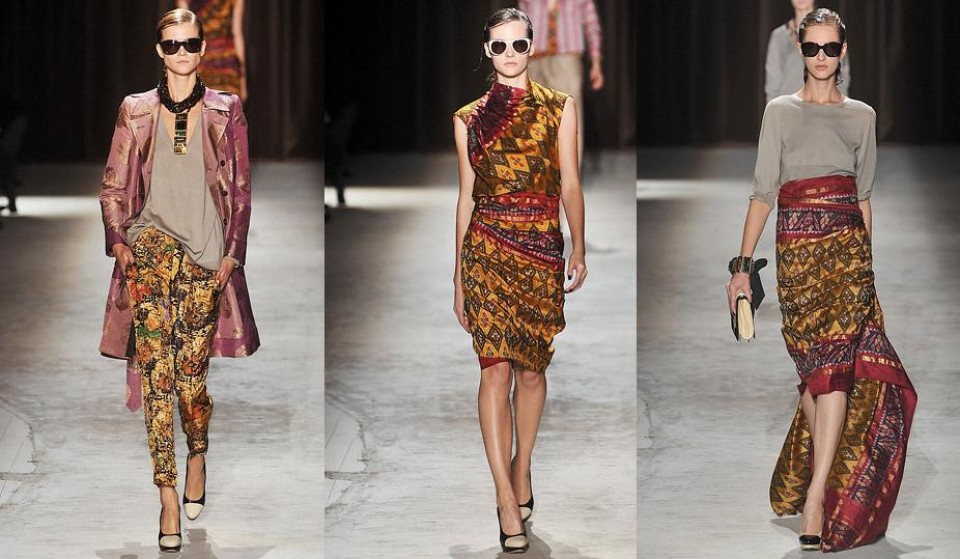 Dries Van Noten S/S 2010, Inspired by the way saris are wrapped around the skin. (Image via Squa.re)

Van Noten’s inspiration from Indian fabric, styles and fashion are evident in his own collection, especially in his use of embroidery. 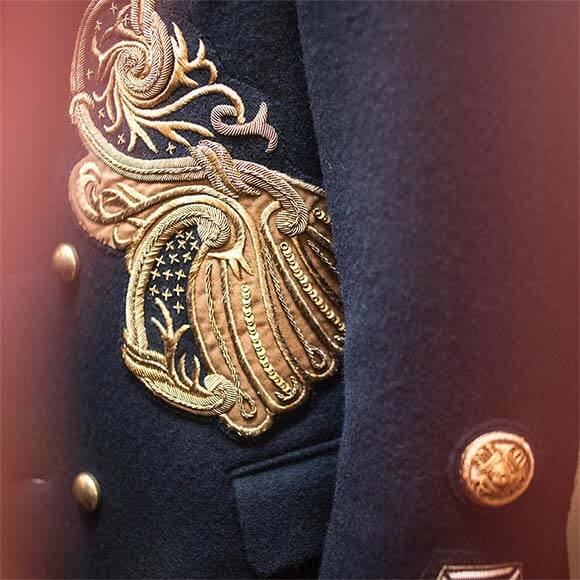 In fact, the designer has a cottage industry involving 3,000 people working on the many embroidery techniques in India because Van Noten values embroidery work in every collection he puts out. His styles, again, vary – with some embroidery work being subtle and some standing out and being slightly louder.

Dries Van Noten has been communicating with his embroidery factory in Calcutta for about 25 years now and has invested time and trips between India and Antwerp to make decisions on threads, beads, and hues. Zari is a fine gold or silver thread, woven into fabrics and is traditionally used in Indian and Pakistani garments. UK fashion designer Matthew Williamson is recognized for his Indian influences on fashion, especially his zariwork, which is inspired by the traditional Jodhpuri attire from Rajasthan. 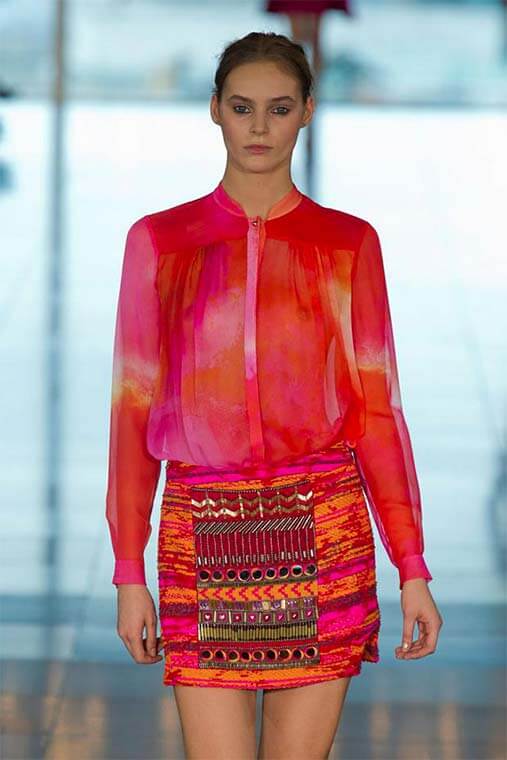 Williamson’s work not only reflects quality tailoring skills but also his vibrant palette encompasses his cultural influences. While the colours scream passion and romance, they also transport one into a festival of colours, celebrating freedom and energy.

Apart from his use of colours and zariwork, Williamson’s India-influence is also evident in his use of silk blouses with Nehru collars and decorative beaded panels on shirt collars and sleeves.

Indian accessories cannot be left out in this conversation – especially not the bindi, which has decked out the likes of Gwen Stefani, Madonna, Katy Perry, Kylie Jenner etc. since the 90s, and still seems as alive as ever today. 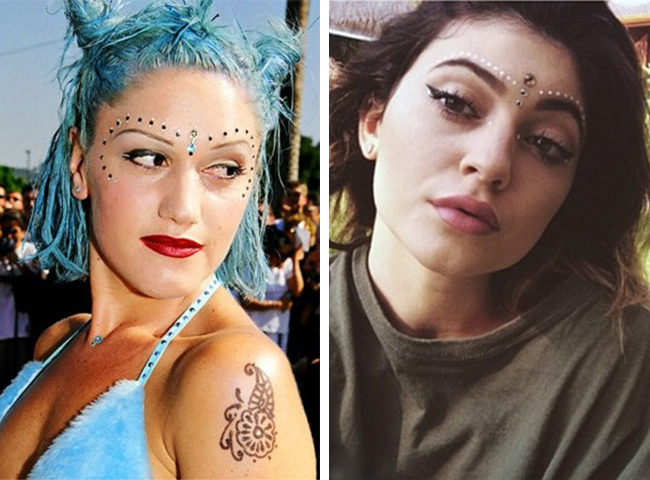 In fact, designer Jean Paul Gaultier, for his fall/winter 2014-15 collection presented “Brits in space” but drew inspiration from the 60s era in Bollywood – complete with black bindis. A variety of looks were created for the models, and the Indian look materialized into building a towering beehive-like structured hairstyle, similar to that of Asha Parekh and Sharmila Tagore, finished with a black bindi, winged eyeliner and defined brows. Interestingly, while the look resonated a vintage Bollywood vibe, it also fit into the futuristic Goth London theme Gaultier was going for. 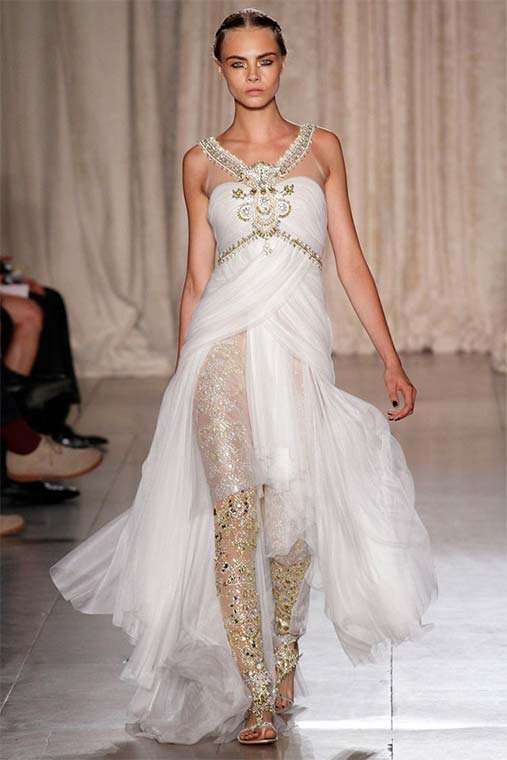 No Indian-inspired collection is complete without drapes and hand-sewn embellishments. Marchesa’s Spring/Summer 2013 collection is no different, with its elaborate threadwork, sari draping and lots of fringes.

However, perhaps what stands out the most for me in this collection is what appears to be henna-inspired body décor in gold. Interestingly, this henna motif is realized on a mesh material churidar style pair of pants, combining two aspects of Indian fashion into a gorgeous looking garment. 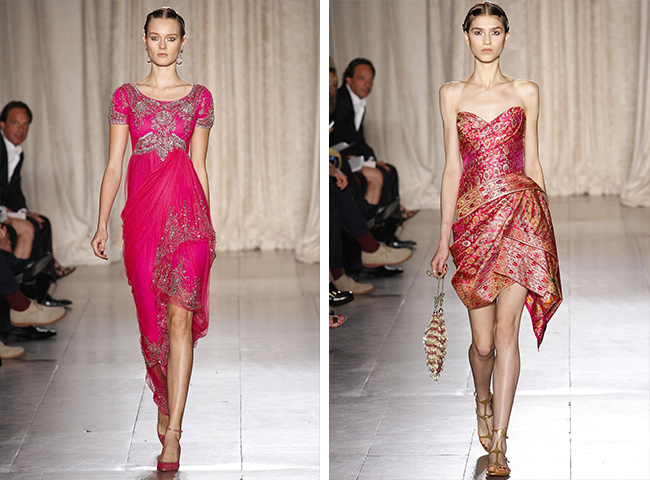 The US brand label also picked some obvious inspirations from the quintessential Indian saris. They applied the sari drapes to a sweetheart neckline dress, and also combined the sari and the sari blouse into one asymmetrical dress. The colours, again, are reflective of India’s rich history of textiles and traditional crafts, and perhaps their use in Western fashion continues to keep them alive. 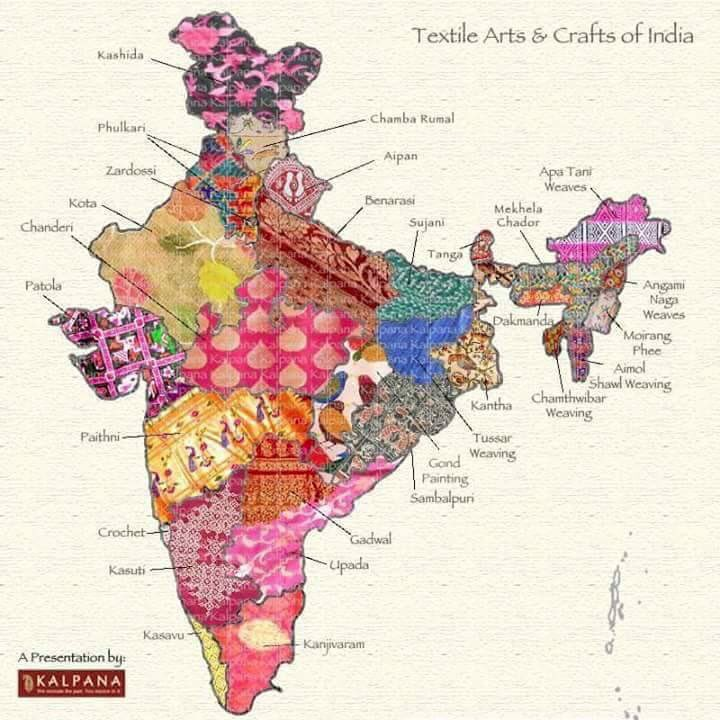 Ancient traditions in Indian fashion and design can be kept alive by studying and observing the wonderful possibilities of amalgamation between different cultures and myriad textiles. Indian textiles, patterns, fabrics and designs have influenced many fashion designers in the past and continue to do so in the present scenario too. This certainly emulates that fashion designers and brands worldwide are embracing the Indian prints and fabrics for their inspiration.

Perhaps fashion design institutes can incorporate an in-depth study on Indian textiles and the culture specific fashion as a part of their respective curricula.

Khadi. Chanderi. Ikkat. Ajrakh. Tanchoi. Zari. Kanjeevaram. Bandhani. These names can take one on a journey spanning the length and breadth of Incredible India. Whether you’re a fashion business ...

7 Structures That Bend The Rules Of Interior Design

“The first rule about decorating is that you can break almost all the other rules.” — Billy Baldwin. Design is art, comfort and dream, design is unconventional. Here we talk about people, who cr...

What to Expect After Graduating from Fashion Design Colleges

What Do Fashion Designers Do? The fashion industry has always been one of the most vibrant creative spaces in India. Today, it seems to encompass even more in its vibrancy as it takes into its folds,...

How do the latest trends affect the Business of Fashion?

After a turbulent 2020, the Indian economy witnessed a promising start in 2021 until the second wave of coronavirus derailed the swift recovery. However, subsiding cases and revival of business activi...