The origins of print advertising in India go as far back as 1780, when James Augustus Hickey started publishing the Bengal Gazette, a Calcutta-based weekly. It carried classifieds about auctions and goods that were available for sale. However, these ads were very simple in nature, and mostly in the form of lists. Illustrations only started appearing in advertisements in the early 1900s. By then, more newspapers had popped up in the country and the formalisation of advertising as an industry had begun. Kicking off this era was Mumbai’s B. Dattaram & Co, the country’s first ad agency, which began operations in 1905.

Advertisements in the early days were usually sketched out, and were very minimal in nature. Most of them usually had two segments, separating the illustration from text. What’s also interesting to notice is the space allocated to text, and the amount of text used as well; both substantially more than what we see in ads today. As the newspapers didn’t print in colour yet, different types of fonts were used to differentiate between the company name, tagline, and description. This trend continued until the 1920s, which saw more and more ads going beyond the bare minimum. Illustrators started becoming more detailed in their drawings, often using images of Indian Gods to catch the reader’s attention and also pander to the Britishers’ fascination with Indian culture. 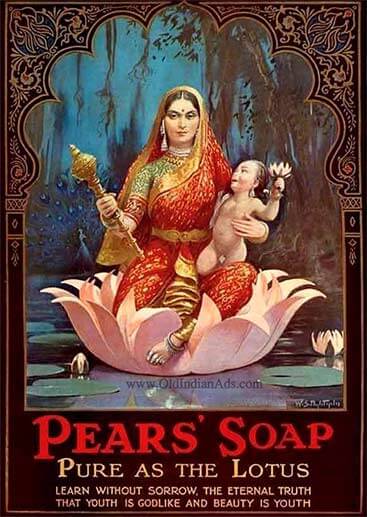 The 1930s saw more of a mix between the two formats. Local, less wealthy brands stuck to more text, while the moneyed ones used detailed, coloured illustrations to make their products stand out. Most of the advertisements during this era were dominated by household essentials such as soaps, sugar, and tea, with the occasional ad from India Tourism and The Bombay Armoury.

The ’40s saw ads getting more political in nature, as the struggle for Independence was in full swing at the time with Anti-British and Anti-Foreign sentiments running high amongst the Indian populace. For instance, this ad by the ‘Indian Independence League’ from 1942 shows British soldiers beating up Indian women and asking them to ‘crawl along’ on the ground. The copy reads “Avenge This British Outrage”. 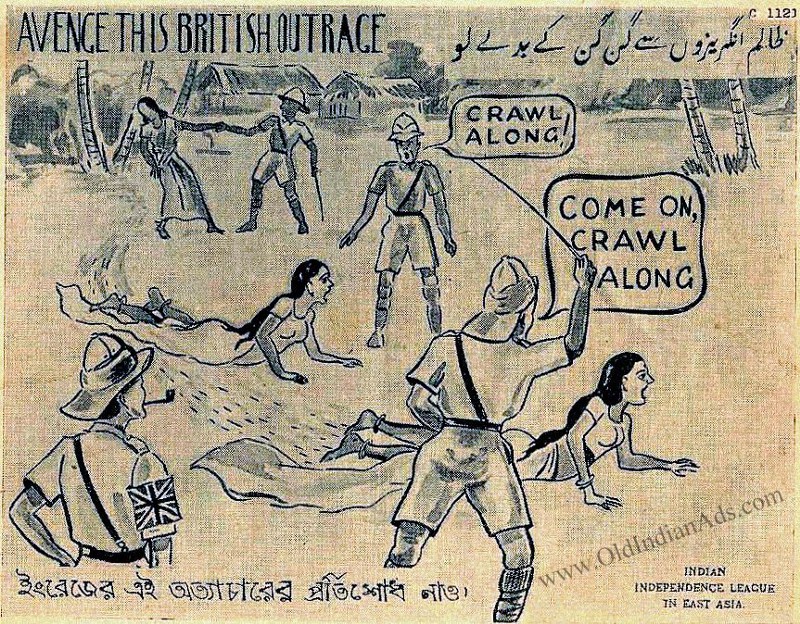 An ‘Indian Independence League’ ad from 1942.

Another ad by the ‘Indian Tea Market Expansion Board’ reads “Tea is 100% Swadeshi” while, the illustration shows a woman with a spinning wheel, wearing a saree — possibly made out of linen or khadi cloth — and drinking tea. The ad is making a clear reference towards the Swadeshi Movement, which encouraged people to prefer Indian products over foreign ones. 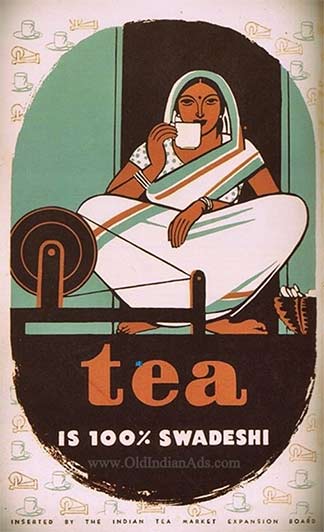 Post-Independence was the first time Indians had a taste of what real freedom felt like. Newspapers no longer had to worry about censorship & the British, which also let the advertising industry spread its wings. With the British Sahibs gone, this would also be the first time advertisers only had to market their campaigns towards the Indian demographic.

Hence, illustrations in ads started depicting people who looked more Indian than British. This ad for Hercules cycles from 1956, for instance, shows a milkman with his large containers of milk travelling on his bicycle. The same, if marketed to the British, probably would have a man or a soldier in a suit. Another ad for Brasserie from 1954, depicts an Indian woman with a bindi and plaited hair. 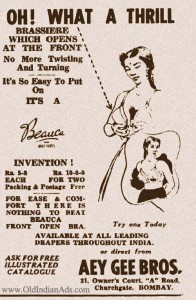 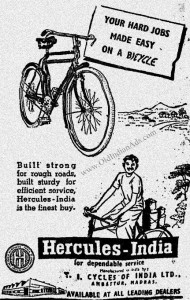 The 1960s kicked off a different era, as one of the most recognisable faces in advertising was born during this decade: The Amul Girl. First appearing on a billboard in 1966, she was conceptualised by Eustace Fernandes & Sylvester DaCunha of DaCunha Communications. The signature chubby cheeks, wide eyes and long eyelashes, which were decided upon to keep the illustration simple and easy to draw, have continued to this day. 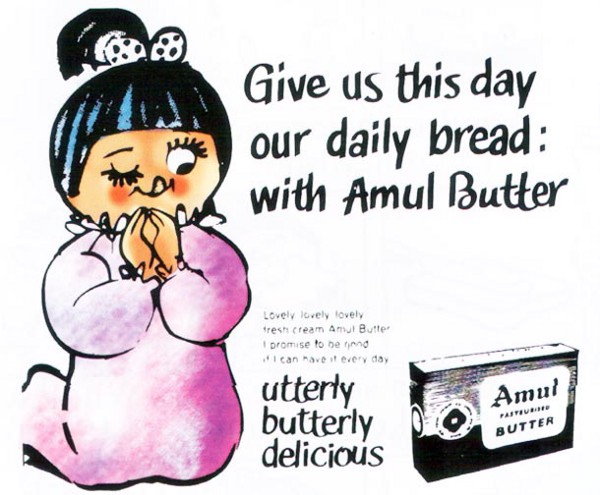 Even today, in print and digital ads, the Amul girl is hand painted by illustrator Jayant Rane.

We also saw the Parle G girl show up during this decade, who was first illustrated by Maganlal Daiya of Everest Creatives. His illustration is still used on the packaging — a little girl with a bowl haircut and brown eyes — a shining example of a mascot that has survived the test of time.

Meanwhile, outdoor billboard advertising was getting more popular by the day, and the ads were usually hand painted by illustrators, much like film posters. The 60s also saw a lot of outdoor political advertising gain traction. They followed the usual template — the faces of famous politicians and the party symbol, but also sometimes got creative. For instance, this billboard ad from 1967 divided the space in two segments: one for ‘Congress,’ which depicted a fat man with bags of grain, and another for ‘Progress’ with faces of the opposition party leaders. Everyone in the ad is drawn in cartoon-style, kind of like characters from a comic. It is a break from the norm, and would certainly draw a passerby’s attention. It also looks better than the political advertising we see today, which feels like a bland Graphic Design job where the designer is trying to fit as many head shots as possible. 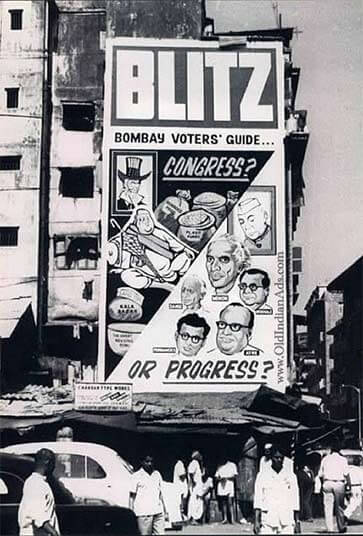 The Pivot To Photography

Although used sparingly in the 1940s, photography in advertising became more mainstream in the 1970s. Celebrity campaigns became increasingly popular, which helped the brands to convert star power into brand equity.

This reduced the number of solely illustration based advertising. Many a times, photography and illustrations were used together to create an ad, but soon — at least for the bigger brands that could afford it — photography took precedence. Today, Design schools in the country also offer photography modules in their Communication Design courses to make their students industry-ready and highly employable. 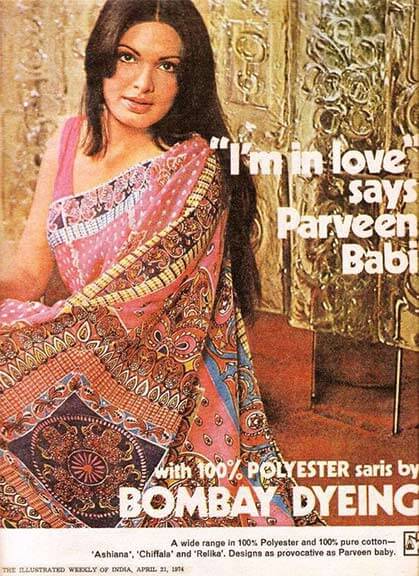 Although, there are exceptions. All the Amul print ads, to this day, are made by hand and then scanned. Agencies also use the old way of creating ads when a specific campaign demands it. Even storyboards, which are rough sketches of individual frames in an ad, are usually drawn by hand.

The digital era is truly the golden age of advertising, for the simple reason that we have the best tools at our disposal to bring ideas to life. The sky’s the limit for someone eager to break all barriers in the creative domain such as the advertising field.