IIAD » Stories » Beauty lies in the eyes of the beholder

Beauty lies in the eyes of the beholder 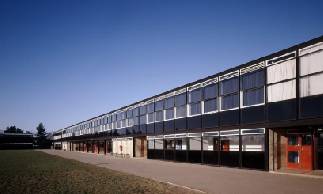 Beauty lies in the eyes of the beholder…..

….rings especially true when referring to the beauty of Brutalist Architecture.

Most often the prevalent terminologies used for them are massive – beast – eyesore – monstrosity – ugly – unfriendly – lacking the humanising touches of older architecture – depressing – oppressive – and many more! This has led to Brutalist buildings being prominently featured in the ‘world’s ugliest buildings lists!’

This unique architectural style was a break from tradition but left people feeling confused and upset. It elicited within them the feelings of either love or hate. ‘Brutalism’ is derived from ‘béton brut,’ meaning raw concrete in French. Seen in the work of French Architect, Le Corbusier from the late 1940s with the Unité d’Habitation in Marseilles, the term was first used by architect Alison Smithson in 1953 for an unexecuted project for a house in Colville Place, Soho. She described its warehouse aesthetic of bare concrete, brick and wood “as the first exponent of the ‘new brutalism’ ” in England. However, it was architectural historian and critic Reyner Banham’s review in 1955 of architects Alison and Peter Smithson’s Smithdon High School at Hunstanton in Norfolk, with its uncompromising approach to the display of the steel and brick structure that established the movement.

After World War II, the need for housing was at an unprecedented high while countries began to rebuild their destroyed cities. The social, economic and political scenario then influenced the design concept significantly in terms of materials being used and cost of development. Two noteworthy buildings commissioned as social public housing projects during this time was the Cite Radieuse in Marseille and Robin Hood Gardens in East London which helped established the notion of brutalism.  Cite Radieuse (Radiant City), was a high-density multi-family residential project developed by Le Corbusier. He said the ‘home is a machine for living in,’ to an entire community. It meant that a home in many ways acted as a machine to suit people’s needs and was

adaptable. The standardisation (spatial and functional optimisation) seen here became a prototype that was later used for mass replication. Similarly, the high quality housing project, Robin Hood Gardens built by the Smithsons in early 70s was distinctive for its noise-reducing features, like exterior concrete fins, and for its elevated walkways, known as ‘streets in the sky’, intended to foster interaction between neighbours.

ARTiculations in The Case of Brutalist Architecture, affirms that not all concrete buildings are brutalists and neither are all brutalist buildings necessarily made of concrete but the defining principle of brutalism is over focus on the material itself and attention to the sculptural form.

Brutalist buildings (like all buildings) require regular maintenance. The fall of Brutalism can be attributed to the cold and austere nature of the architecture and constraints of the materials used. Raw concrete doesn’t age well often showing signs of water damage and decay. With high thermal conductivity, it led to freezing in winter and boiling in summer. Brown stains leaked from joints due to metal reinforcements rusting from within. Also, the exterior raw concrete made the perfect canvas for graffiti artists to vandal. In the 80s Brutalism slowly began to symbolize urban decay, economic hardships, crime and depression. It meant that slowly and steadily many of these buildings were being demolished to be replaced by more socially palatable design. According to architect and curator, Chris Grimley, “we’re quick to judge, to erase things that don’t fit into accepted notions of beauty.”

But amidst these demolition drives there continued a quiet and growing movement to protect them. The Victoria & Albert Museum in London acquired and has preserved a three-storey section of the Robin Hood Gardens before it was demolished explaining, “not only a style but also as a philosophy, Brutalism sought to reframe the relationship between society, architecture and urbanism.”

Shaun Carter in his TED talk Why We Should Value our Brutalist Architectural History reaffirmed the need to “revalue and repurpose these buildings to explore their value as cultural artefacts. They are fundamentally snapshots in time of what we thought, what we felt and what our ethics and morals were. They are the containers of our story to tell and retell in the future.”

The entertainment industry continues to seek inspiration from Brutalism as well as the gaming industry. The raw forms – solid, legible and with clear lineation – are the perfect material for designers to craft their worlds with and ignite imaginations that are shocking and attention-seizing.

of GQ has an interesting theory. He says, ‘Brutalism is the techno music of architecture,

stark and menacing. Brutalist buildings are expensive to maintain, difficult to destroy,

remodelled or changed, so they tend to stay the way the architect intended. It’s return could be because permanence is particularly attractive in our chaotic and crumbling world.’