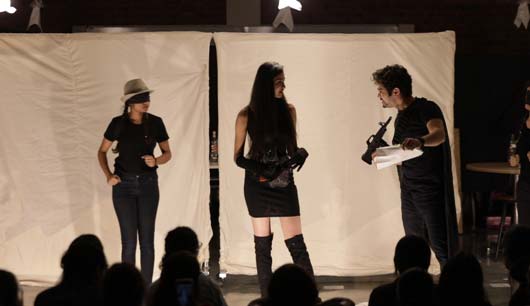 Design Students of IIAD presented 6 theatrical plays which marked the culmination of their 2 week-long interdisciplinary brief.

They extensively practiced and prepared for their performances, working closely with the faculty and incorporating their insightful feedback as they progressed forward. They also had the opportunity to rehearse with the renowned Theatre Artist and  Director, Maya Krishna Rao who aided them in comprehending the essence of play-writing, character development and performance.

With their attention to minute details such as voice modulation, body language, gestures and expressions along with all the other non-verbal communicative methods that often get overshadowed by dialogue and speech, the students presented their plays to an excited and eager audience who cheered them on:

The first group, Apollo 18, performed a comical representation of the journey of a girl, Zara, who is on the verge of discovering her true self in their play titled ‘Mediocrity’. Suppressed by those around her, Zara navigates and endeavours to triumph the tricky waters of her mediocre existence and the crazy characters that surround her.

‘The Golden Years’ by Renaissance of Rasas

The ‘Golden Years’ performed by the Renaissance of Rasas was a short comedy script revolving around the daily life at an old age centre. Filled with humor and drama, the play was a light-hearted take on the slow-paced life lived by senior citizens.

‘A Case of Absurdity’ by The Arson Crew

The Arson Crew presented an adaptation of Jack Masterson and The Case of Absurdity by Michael Maxwell through their play – ‘A Case of Absurdity’. The play delves into the mystery of a priceless family heirloom that goes missing, providing Jack, the private eye, a perfect opportunity to show New York he is the best detective. However, the more Jack and his partner Lisa ‘unsolve’ the case, the more tangled and absurd it gets leaving the audience wondering – will they be successful?

‘The Mayhem Motel’ by Akashvani

Akashvani’s play titled ‘The Mayhem Motel’ began with the character of Hector who hopes to spend a relaxing day behind the desk of a quiet country motel. What ensues, however is anything but relaxing. As people keep pouring in, checking into the motel one by one, the play presents the perfect recipe for … mayhem and disaster!

‘A Snitch in Time’  by Seedhe Maut

Seedhe Maut’s ‘A Snitch in Time’, a play about time travelling took the audience on a thrilling adventure of saving people before they meet with their end. Blended with satire, the play raised pertinent and at times humorous questions on the consequences of playing with destiny and altering fate!

‘Puss in Boots’ by Sutradhara

The final performance by Sutradhara was a pantomime set in the American Wild West, titled ‘Puss in Boots’. Threatened by the notorious outlaw – Wild Wilma and her gang, the people of Dodgy City put on their dancing shoes and with the help of a dancer and his inherited cat, find a way to save the town!

The weeks of effort and hard work put in by the students and the unwavering support of the faculty was evident in the splendid sets, lighting, sound effects, dialogues and the carefully detailed costumes that captured the essence of each of the plays and its characters. As Shyam Attreya rightly stated in his introduction to the performances, there was “some comedy, some tragedy but all of it was drama!”