IIAD » Events » IIAD Students Exhibit their Work at the Museum of Womanhood, IGNCA

IIAD Students Exhibit their Work at the Museum of Womanhood, IGNCA 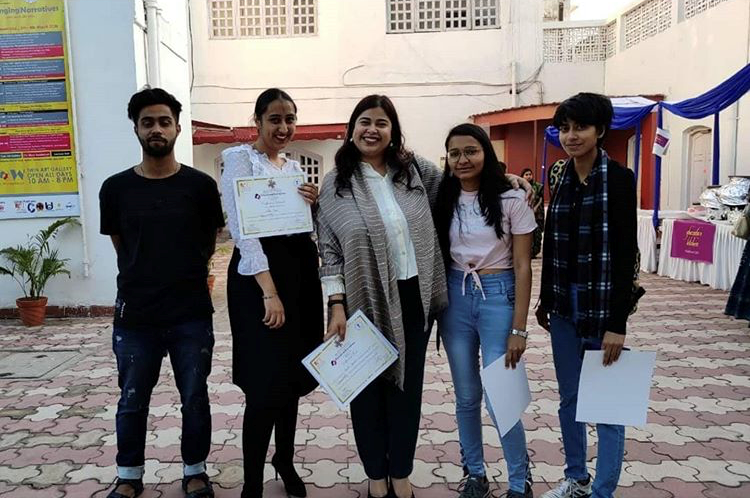 Congratulations to the students from Foundation Year for receiving the second prize for their installation titled ‘Fragmented Identities’ which was  displayed as part of the ‘Museum of Womanhood’ at the Twin Art Gallery of IGNCA, Delhi. It was a five day exhibition from the 4th to 8th of March around the theme of “Changing Narratives : Kal, Aaj aur Kal” on the occasion of International Women’s Day.

The students of IIAD, working collaboratively, set up two installations. The first was titled Fragmented Identities. This artwork was an assemblage of cubes that representd society trying to ‘box’ a woman into its expectations of her. The woman’s body was depicted in a state of chaos and fragments, which ultimately, when looked at as a whole, brought together the woman herself.

The second installation was titled  ‘High Tide, Low Tide’ which was an assemblage of spheres. The tides were meant to not only depict the tears of a woman but also strive to highlight the burning embers within her. The movement of the ten spheres which made up the installation, represented how women must rise and march forward to change the tide of history. The students not only had the chance to showcase the hard work, effort and thought that went into conceptualising and executing these designs but they also had the opportunity to further a social cause – to make a difference and raise awareness and ultimately to celebrate the spirit of femininity.