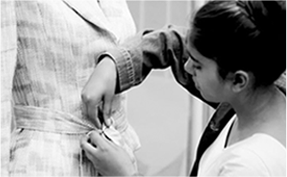 Consciously or unconsciously, films impact and influence our lives in more ways than one. Being designers, it becomes all the more important for students to understand and appreciate a film in all its formal elements. Having gathered the know-how on perspective and form in their foundation year, students across the three disciplines (fashion, communication and interior architecture and design) were part of this workshop on film appreciation.

The informative workshop was facilitated by Vartikka Kaul, who is an expert on cinematography. The students were given an insight into film history and also introduced to a few film stalwarts like Edwin S. Porter and D.W. Griffith. While the first half of the session included walking the students through the history of cinema, the latter part of the workshop included a discussion on the technical aspects of cinema like camera, focal length, lens and much more. The main objective of the workshop was to get students acquainted with the language of cinema and understand how cinema is made and constructed.

Vartikka Kaul is a Ph.D Scholar at the Department of Cinema Studies, School of Arts and Aesthetics, Jawaharlal Nehru University, New Delhi, India. She holds a graduate degree in Mass Media, a post-graduate degree in Aesthetics and an M.Phil. in Cinema Studies. In the past, she has worked with India’s leading television broadcast and publication companies. Due to her commitment towards knowledge creation and exchange in the field of film and television studies, she decided to move to teaching full-time.

Over the years, Vartikka has taught graduate and post graduate students at Indraprastha University, Delhi and University of Mumbai. She has also been recently invited as a visiting scholar at the University of Illinois, Chicago, USA for a collaboration with their South Asian Studies Center. Her research interests include science fiction, Indian superheroes, Bollywood music and visual effects.